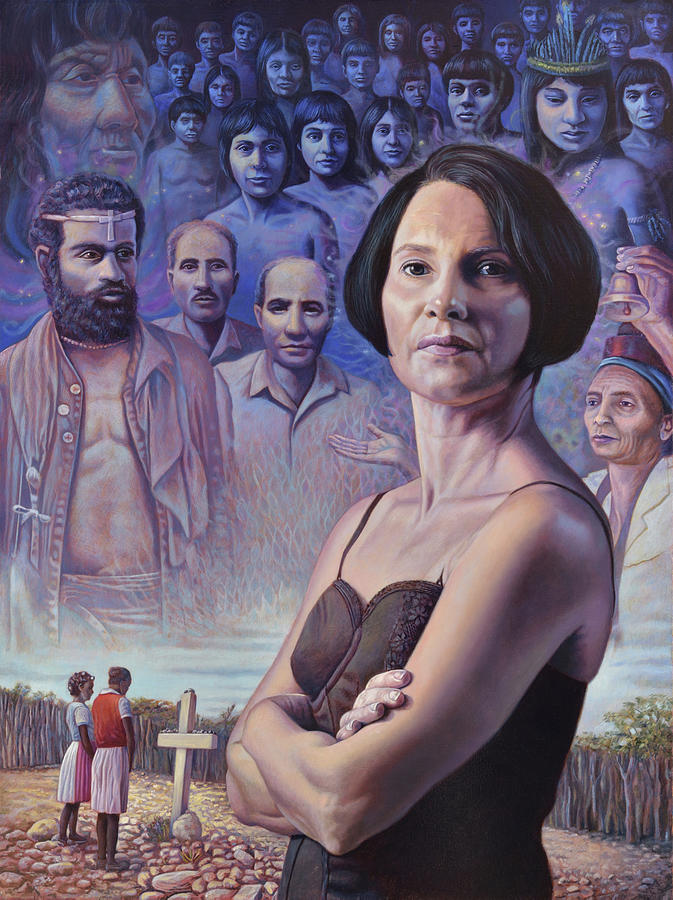 This is a portrait of my dear friend Irka Mateo, a well-known folklorist, songwriter and singer from the Dominican Republic. When I met Irka, she had just moved to New York. She regaled our expatriate Dominican friends and me with her research on the riches of folkloric music played in the rural areas of the Dominican Republic. The depth and breadth of her knowledge of Taino culture ￿ the indigenous nation slaughtered by the Conquistadores￿ of the Liborio Mateo (￿The Saint of the Maguana￿) and his Messianic movement, and of another manifestation of the Messiah in the Palma Sola movement of 1961 collectively astounded me.

As we spoke of the Taino, she revealed her conviction that a small percentage of them had survived the genocide. This was something of a shock. I asked if she believed that the Taino had lived on, in a sense protected by the embrace of the Dominican gene pool, if I may be permitted that poetic notion. Her response: ￿Of course, just look at me!￿ I blinked a few times and had what, I think, was a kind of epiphany: her indigenous heritage suddenly radiated from somewhere within her. This was not a first for Irka. She related that, on her trips to Brazil, she had always been mistaken for an indigenous Amazonian.

During the Dominican genocide ￿ I speak here of the Taino genocide, and not of its later counterpart, the ￿Parsley Massacre￿ against undocumented Haitians living in the Dominican Republic that took place under the reign of terror of the ruthless dictator Rafael Trujillo ￿ the Spaniard Nicolas de Ovando instituted the abusive encomienda system, which turned the island into a grim admixture of gulag and extermination camp. Microbial infections brought by the Spaniards, their African slaves, and their somewhat better treated livestock further decimated the Taino. The confluence of these assaults resulted in the loss of 80 to 90 % of the Taino population, by most reckonings. However, this implies that something between ten to twenty percent of Taino survived, many by escaping to the mountains and deserts in the island, where they intermarried with escaped African slaves.

Irka￿s revelation was stunning: the Dominican education system of my youth had taught a uniform doctrine of total Taino extermination. Absorbing this, I had grown up with a sense of regret, shame, and loss. My newly delivered epiphany unleashed a parade of Dominican faces ￿ Taino faces ￿ across the panorama of my mind￿s eye. Recalling especially the visages of my friends from the San Juan de la Maguana region, the Great Dominican Lie became obvious to me.

My Dominican education had been post-Trujillo shill promoting the insidious notion of a total Spanish Conquest, with its implications of white superiority, even if this was somewhat tempered by the bitter herb of white brutality and inhumanity.

Out of the revelations of that night, this portrait was conceived. Some months later, when Irka and I were collaborating on the cover design of her remarkable recording Anacaona, she was able to pose for me.

In the painting, the following figures are visible: the Tainos (in the upper part of the canvas), among them a Shaman on the left and Anacaona, the Taino Queen on the right, Liborio Mateo (at left with the cross on his forehead); the Palma Sola brothers (Los mellizos, i.e., The Twins) Plinio and Leon Romilio Ventura, who brought their religious movement to Liborio or￿Liborismo,￿ as it is also known; and Reyna Jimenez (ringing the bell), the keeper of the sanctuary in Liborio for many years, until her death not long ago. Irka dedicated to her the Archive Project of Sacred and Festive Music of the Liboristas Communities of the Dominican Southwest.